in the previous post, i showed the chaos that IS the trim....it's been started and parts of it have been installed! it took a good full day to scrape, sand and repair just em's bedroom! her floors have been sanded, stained and have 2 coats of poly on them. so we'll install the trim and then the last coat of poly will go on. i decided to paint the trim once its been installed. first off because we don't have the room to really lay it all out and paint it....and also because i would rather not have to do a bunch of touch-ups once its put up. the crown however, i'll paint that before its put up! there's NO way i'm trimming in a ceiling AND a wall!! it went up better than we thought it would. there were a few missing pieces that got bundled in with other rooms, but each piece was found. and it fit back pretty good actually! i'll need to caulk a few spots, but it'll look gorgeous with paint on it!

here's a picture of the little peanut :) this is her room that i'm showing photos of this post! 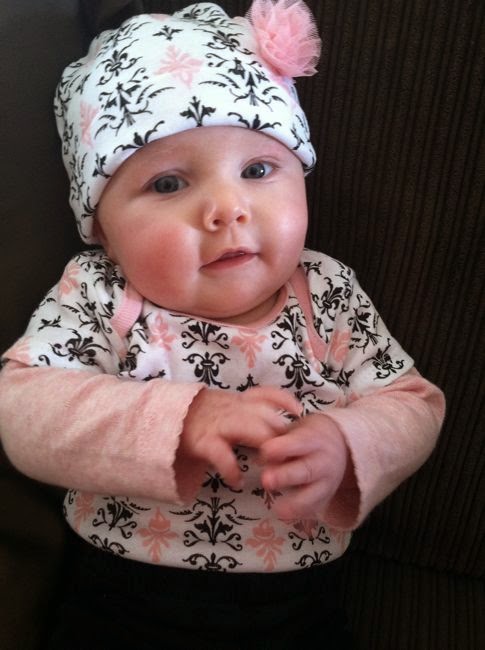 here were the floors before they were sanded, after sanding and right after the stain and poly went on...they look shinier than they will be..the poly was still wet. but i chose a satin finish. im not a glossy hardwood floor kind of gal! so, i originally had the vision of having dark stained floors throughout the house...i was talked out of it. ended up going with a warm medium nutmeg color. i have to say, they look amazing! the guy that did them does AMAZING work!!!


here are a few photos of the original trim put back on. its so pretty.....don't let the sanding spots, the multiple colors of paint or the roughness of it scare you....you have to look past all of that and imagine what it will be like once it has a coat of fresh paint on it! the detail of it is gorgeous! 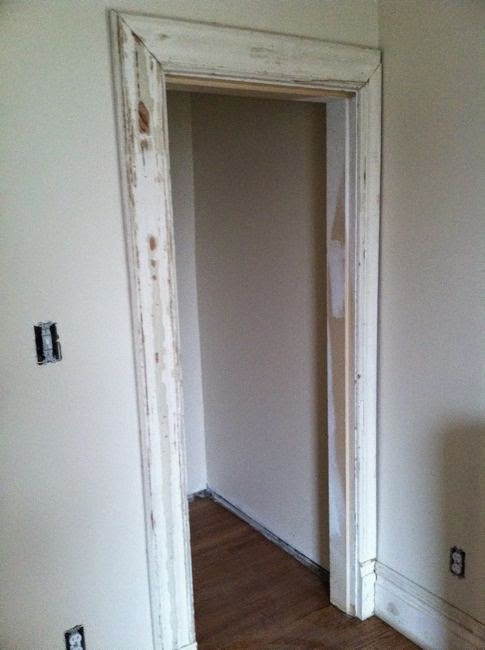 it's moving along! the next room we'll finish trim in, is the guest room. the floors are finished in there too. the only room that doesnt have trim is the bathroom. at some point in the 80's it was remodeled and the big original trim was taken out and replaced with some ugly 80's floor tile. sad. so we will have to find some trim for that room from a salvage place.

here's a sneak peek at the kitchen floor!! the next post will be about this room. i'm LOVING how its turning out!! cabinets are going to be installed this weekend hopefully! 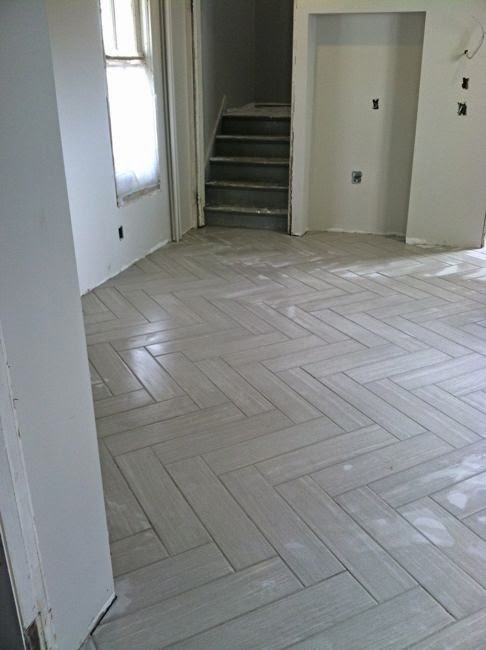 so, i was sort of kidding about titling the post as 'welcome to my hell'...but once you see what i'm talking about, you might agree with me. don't get me wrong, i LOVE our house...but oh my gosh, this part is going to take forever. and i mean, forever.

we're getting to the point where the 868 pieces of trim can be put back on upstairs. and just looking at it all is so daunting. it makes me wonder what i got us into. maybe because i'm sort of responsible for most of the 'finish' work from here on out. i'll have to scrape and sand down ALL of trim before we get it back on and then repaint it. i would love to strip it, but i would be at that for years. there's just way too much. and it has about an 1/8" of paint buildup on it...thats years and years of paint. i dont have the time to strip each piece, unfortunately. its fir, it would be gorgeous...but i digress. anyways, with taking the plaster and lath off and then putting sheetrock up, the trim is going to fit back together differently. the plaster was 1/4" thick in some spots on the wall and almost 2" thick on other parts. the husband tried furring the walls out so they would at least be flush with the window frames and door frames...which took forever and a huge pain in the butt! some of it worked, some of it didn't. SO, we'll have to be retrofitting some of the trim to get it to work properly. and there are places where there wasn't trim, that we need trim and vise versa. so it'll be a long drawn out puzzle to get it back. and we'll still have to go to some architectural salvage places to find some trim to match. 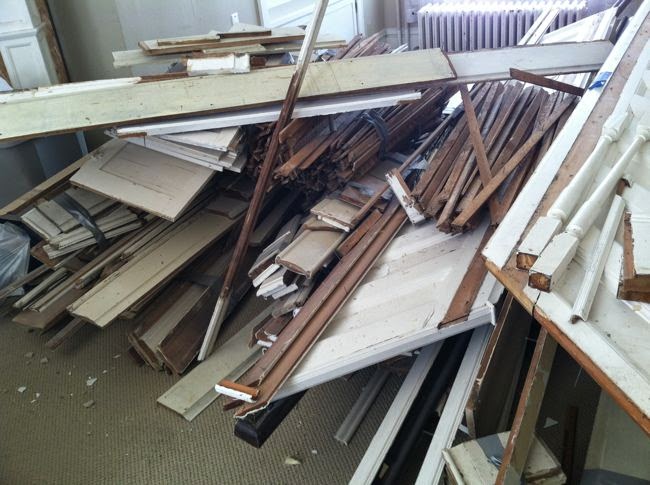 this is a photo of the trim JUST for the upstairs. and the room that its in is about 16' x 12'....and its piled about 3-4' high. just looking at this picture scares me. i have to say, once its up though, and painted, its going to be beautiful....

the second part of my hell, is this.....since the siding was put up on the house, i don't think it was ever repainted the right way. im thinking there was never scraping the old paint off before the new paint went on. the outside is ridiculously alligatored and peeling and chipping and in general, scary as hell. it is going to literally take me ALL spring and summer to prep and paint the exterior of this house.

and the third part of my hell is this....the windows. yes, we're keeping the original windows. people have tried to talk me out of this....many many times. one things is the cost factor, one is the 'look', one is the efficiency. i did a TON of research on using original windows in old houses. and found that the air basically escapes out the cracks and out of the frames. the glass isn't exactly the culprit. IF they are insulated well around the window frames, and the glazing on the windows themselves is air tight, the windows are going to be almost as efficient as brand new ones. this made me feel good....but then i realized how much work it was going to be to get them to that point. the husband did a great job of insulating really well around the frames, so that will help tremendously. but the windows haven't been touched in decades. most of them are painted shut and most dont have screens on them. most of them do however have storm windows. which also have to be scraped, repainted and reglazed. AND about half of them have been broken during the demo...which actually makes me sad, because you can't just go to the store and get the old, wavy glass anymore. if i wanted to put that kind of glass back in, i'll have to go to salvage places, find old windows, take them apart and use the glass...hmmmmm. so besides doing all of that work on the exterior of the house, i am going to have to scrape, sand, repaint, and reglaze every single window. oh and there are around 40 windows. i think maybe 36 to be exact...? PLUS a storm window for each window, PLUS building new screen windows for each window. sounds fun, right?! 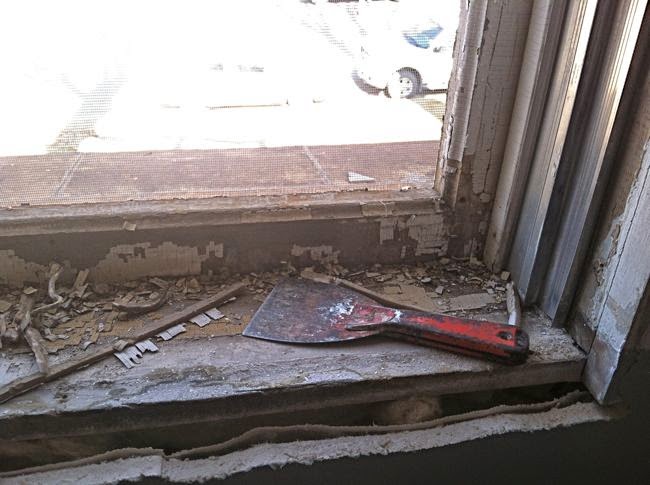 so to end the post on a HAPPY note....our bathroom sinks JUST arrived. i had to unpack them and put them on the vanity to see what they look like! i think they're going to look great in there! a nice pop of white on the vanity to bring the room all together! 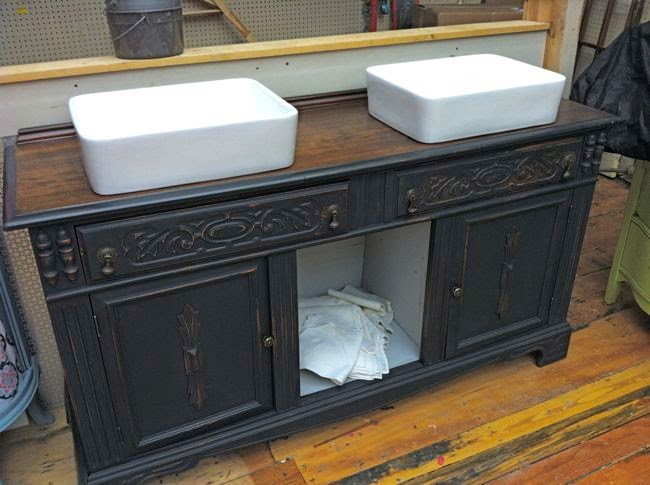 another FIND, and bathroom update

we've been so busy at the house! and when i say 'we', i really mean my husband :) i JUST started doing some things this last week. its finally MY turn to get in there and do things that i'm able to do. but he's been so busy and done such an amazing job on everything!! AND i don't want to forget to mention all the friends and family that have been such great help as well....we are so very appreciative!

OK, on to the new 'find'. during demo upstairs we realized that the house was originally built with all vaulted ceiling upstairs. can you imagine?! first of all, design wise, gorgeous. but practicality wise, that house had to have been FREEZING! the vaults were actually built right into the roof framing....meaning that there was no airspace between the vault and the roof...so no space for any insulation. not that they had any insulation anyways...but still...COLD. we also discovered that the upstairs was maybe only 1 or 2 rooms when the house was built. the vaults were sort of all connected and it seems like the guest bedroom and our dressing room area were all one huge vaulted room at one time. and emma's room may have been tied into it as well. i SO wish i had photos of that house when it was built! i have to do some digging and find something.

we (and again, when i say 'we' i mean the royal we...which means the husband...but 'we' in the sense that i made the design decision...you know, so i can be included in the 'we'!) decided to re-build the vault in the guest bedroom because there was a window in the attic which was included in the vault. it didnt work out to have the vault in the our dressing room area, because i'm a symmetrical fanatic and the vault would've been off center in the room....and it would've look weird. i am SO happy with how it turned out...and the 'guest' will have the coolest room in the house..


you remember the bathroom, right?! well last time i posted, i was lamenting over the tile and color selection. after about 7 trips to the store, i finally came up with the tile selection. and guess what, they didn't have enough in stock. so its on order, but should be here next week so we can get it laid. the husband and i were however able to get the tile set in the shower. and i am loving it. its classic, clean and fresh. i tried to chose most things that would be period to the house and added a few fresh updated pieces....but still in the traditional scheme.

i originally was thinking of doing a sort of 'rug' or center design in the bathroom floor, in one tile and then doing different tile. well, that didn't come together. i couldn't find anything that i liked together. so i ended up going with a marble hex tile for the entire floor. which i think will look lovely. we're also doing a sort of border around the floor in the pencil tile, so it brings in the subway tile look down to the floor, from the shower. i chose standard white subway tile for the shower surround....and added a cut marble tile border, just to break it up a little and to add some marble to connect everything in the bathroom.

oh and how could i forget to give an update on the bathroom vanity....its been finished now for about a month. i chose a deep navy for it. i used milk paint, to give a nice chippy finish and i turned out perfect for the bathroom! and i ordered two rectangular white vessel sinks to be installed on the top. 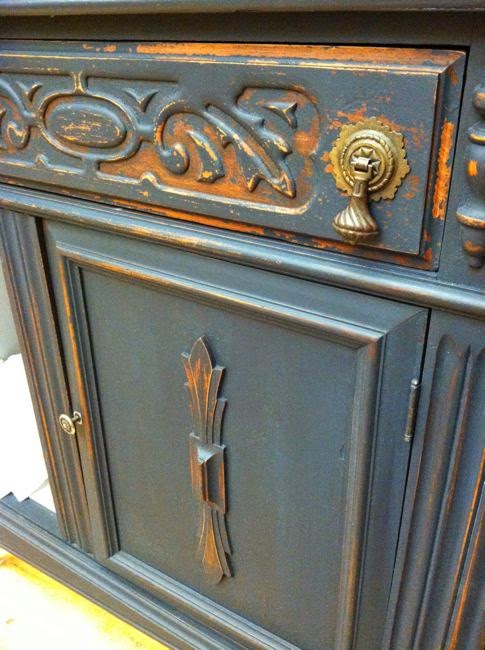 Posted by adourn at 1:42 PM No comments: