its been a few weeks since i've done a post! we've been busy with the exterior...prepping, priming and painting. i was really excited to start! finally chose all the colors and really wanted to see them up on the house. seeing the exterior is in such rough shape....layers of old paint on the siding and trim, we had to pressure wash first, then get out the scraper and scrape off what we could and then pressure wash again. i thought that using the pressure washer would get off alot more paint than it did....that stuff is STUCK on there. even the scraper didn't get it off. i knew it wouldn't go down to bare wood, so i had an idea of what it would look like...pretty bumpy and alligatored. its just so sad to me that this house was so neglected for so long. its deteriorated so much. here's a photo of the exterior window trim, soffits and crown, and the windows...bad :( 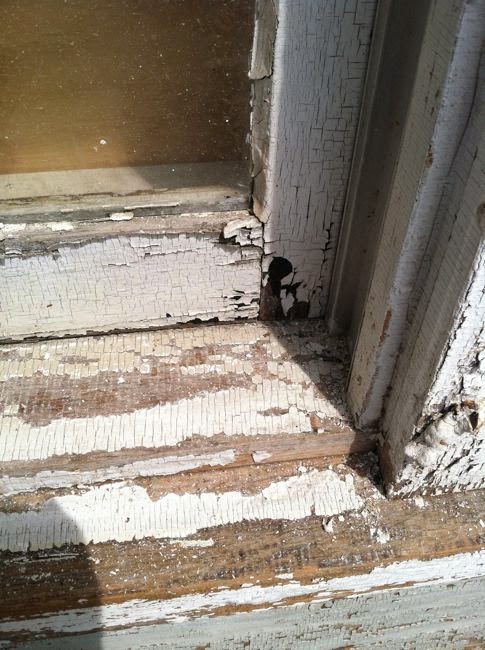 we have a bunch of scaffolding to use for painting...but there are so many sections, that we can't move it around the house each time i get done with a step...meaning, i have to keep it in one spot until i'm completely done with that section. the scraping was the WORST! i don't think i've ever been THAT filthy in my entire life..it was pretty gross. and it was hard work...that stuff doesn't come off easily. i got off all of the loose pieces and tried getting off as much as i could. once that was done, we had the primer delivered and i was ready to start. this stuff is actually pretty cool....and i'm hoping it works and lasts for a LONG time!!! its really like a thick glue. goes on sort of opaque and dries clearish. its a thick barrier and sort of glues it all in place, to prevent further chipping.

once i got the entire section primed, i went up and ordered the paint. that was sort of a fiasco! im not sure if i mentioned they had a really hard time color matching my main body paint color. it took hours to get a match...and it didn't even turn out to be a match. i actually really liked the color they came up with, so its sort of a one of a kind color, just for this house. anyways, i went up to sherwin williams and gave them all of the colors i needed...along with the formula they came up with for the main body color. i ordered 20 gallons to start out with they got it delivered the next day. i stared with the trim. its way easier to paint the trim first, and then the main part. with all of the lap siding and itty bitty edges to paint, its just easier to do the siding last. got both coats on the trim and was SUPER excited to start the main color! went to get the gallon and start...and its the wrong color. how disappointing!!!! i called the rep and he immediately came out and looked at it and took back the 20 gallons and had them re-mix it. i guess they couldn't get it quite right, so they had to start over. so he asked if i wanted to use the wrong color as the first coat...for a heavily discounted price...sure! so they brought it back out, along with the right color. i did all of the trimming in the correct color, just thought that would be easier than trying to be SO exact with the second coat. and that worked out really well.. i got the second coat (correct color) on yesterday and it looks amazing! i love it!! you can still see the imperfections in the siding with all of the chips...but it is what it is...and it looks pretty damn good! hey, if you stand in the street, you can't QUITE make out how bumpy it is...nonetheless, quite the improvement. and i'm so glad i did the soffit in a the collanade grey..its a nice little accent! 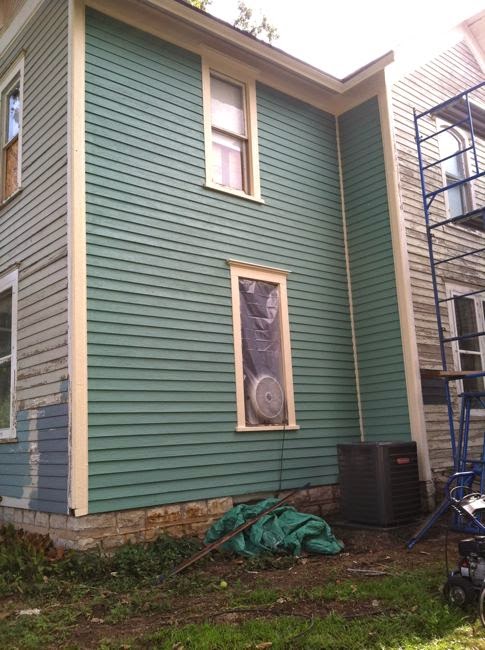 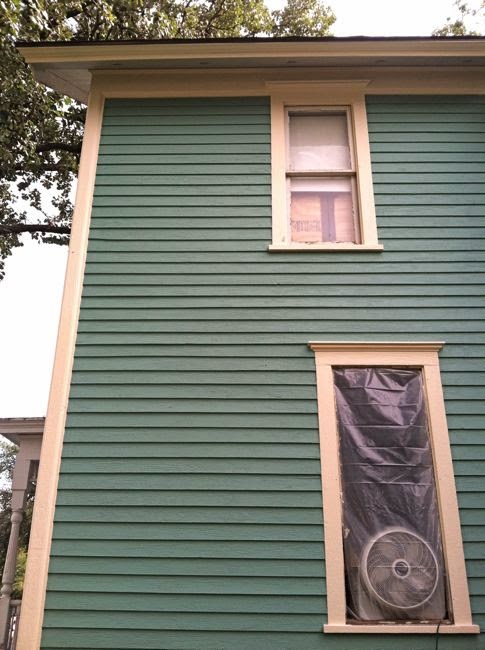 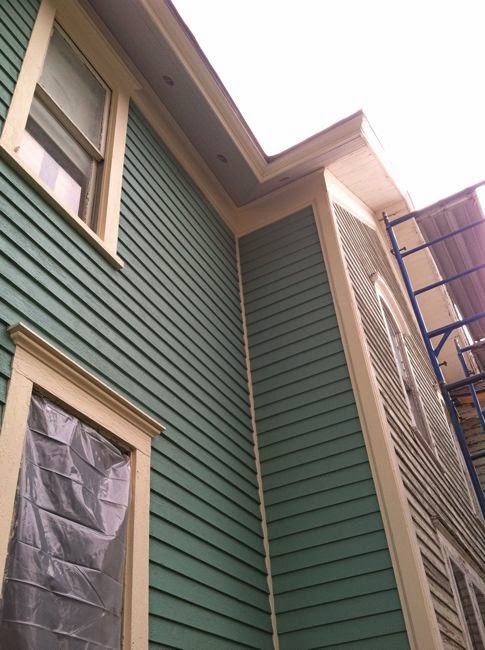 this section was probably about 20ft high...i thought it might be a little scary up on the top..but it wasn't too bad. the next section has a peak...and that'll add another 6-7ft...yikes. 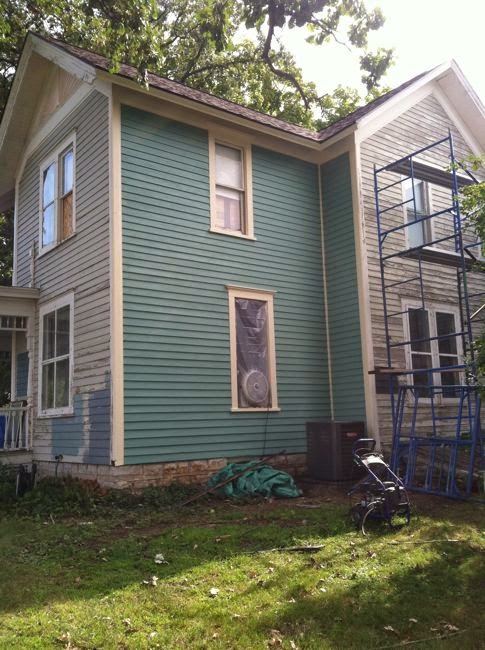 i think its going to look pretty good once i'm done painting. although...this once section took a little over 2 wks to finish...with the paint delay, the rain we've had and lots of other stuff going on. hoping it'll go a little faster with each section. the back of the house is the worst with all of the chipping paint...so once im past that, the prep won't be as bad on the rest of the house. the countdown has begun...this house HAS to be completed by end of oct...we have 10.5 wks to get this done....wow...a little overwhelming to think about.